Simple, effective and easy to implement straight away

When we speak to primary school teachers around the country, we often get asked for some simple tips they can use to build more activity and movement into their classroom.

It can be daunting before you build the habit, but I always point out that getting children more active throughout the day needn't be difficult, and will actually lead to a more focused, happier learning environment for the children in your class and across the entire school.

You'll soon find that children are better behaved, more focussed and better engaged with what you're teaching - so it becomes a much nicer learning environment for teachers too!

So, we've asked our newest team member and current teacher, Ryan, to help with some of the things he's seen work in different schools. You might recognise Ryan from his work on both BBC Bitesize and BBC Supermovers.

Scroll down and you'll find a short video and supporting text with tonnes of ideas on how to start introducing more movement and activity into your own classroom. 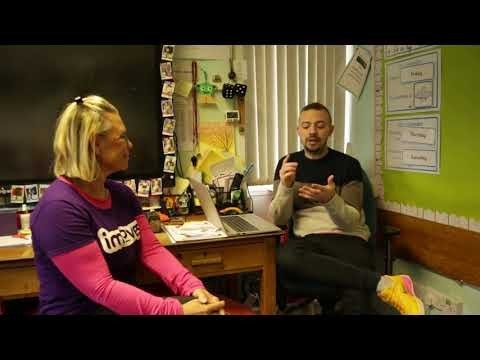 Top tips and ideas for teachers...

Watch the short video to find some great tips and ideas on how you can get your classroom more active.

Prefer to read? Scroll down to read through the full transcript of the video.

If you prefer to read than watch, below is the transcript from the video

Now let’s think about some initiatives that we could use to actually get the children moving in the classroom.

One great one that we found in a school that we were working with was “No-chairs Tuesday”, which was exactly as it says on the tin. On a Tuesday, they didn't have any chairs. And the first time they did this, the kids were in uproar and they said, “where's my chair?”!  But they soon got on with the day with absolutely no fuss. Mixing it with other active elements throughout the day as well really energized the kids in the classroom. It worked perfectly, and it's just that once you've got over that initial, “oh my word, what's this?”, it just becomes the norm.

But I think then you went ahead and took it one step further, right?

Yeah. Well, we did no chairs Tuesday as well, and we also incorporate that into a whole active learning day as well.  I think the important thing is to differentiate the fact that it's not a ‘play day’. Sometimes it can be seen that if you’re doing a day full of activities, what is happening with the rest of your curriculum, what learning is actually being achieved across your English, math’s and science.  But you're making a conscious effort to build activity into the learning which is to be achieved that day.

So, the challenge that we laid down at our school was to find a way to make all of your lessons active for a whole week.  One activity was the active registration, where people had to make shapes with that body to spell their names out as they answered the register.

Another really simple activity was to get the children to hand the books out rather than the teacher, giving every child a random book allocation and then saying, “You’ve got 30 seconds to go and deliver that book to whoever it belongs to”. You've built in 30 seconds of activity, whereas the children have usually just been sat there half-asleep.

There are these really simple, quick things you can do to build in activity in every lesson.  We found that having a dedicated week really made us push what could be done.  We’re now increasing that so we have one every full term and the plan is to keep increasing that so every week is active, but with specific week’s where we celebrate being active.

Actually, what it has shown us is that once you do it for the first time, just how easy it is to change your lessons from being sedentary lessons, where the children are sat and they're looking at something on the whiteboard, to actually be in a lesson that is covering the exact same curriculum outcomes and has the same, if not better, outcomes.  The reason is the children are actually much more engaged as they're both more productive and enjoying it at the same time, whilst having no impact on the value behind each lesson that you're trying to teach.

We find the children actually prefer it. And like you say, once you get over the very first day that you introduce it and everyone's a little bit on this new chess board, well, once they get over that, then the children come up with their own examples, “did you know, sir, that I've been active in this way as well?”.  They take ownership of it and pride in it, and they come to you saying about how they've been active in loads of extra ways that you've not even planned.

I’ve found that so positive for myself, and my fitness levels have actually increased, without using the gym or feeling like I’m doing anything extra.  The buzz I get from knowing I'm creating something here just feels good.

By the end of the day, everyone is leaving tired but with a smile on their face, everybody is that good tired rather than that bored tired and we’re all in a really good mood.

The best bit is when the children are asking what lesson will be active next and you can tell them the really good science lesson you’ve got for them tomorrow.

So honestly, give it a try because it will transform the way you think about teaching and bringing activity it into any classroom.